A team of researchers at William Marsh Rice University in Texas has developed a catalytic reactor which converts carbon dioxide to high concentrations of highly purified formic acid. The technology developed by the researchers is less costly and energy intensive than traditional formic acid producing devices, meaning that it could have more widespread commercial applications. This process is a way of recycling CO2, increasing its energy output and preventing it from being released into the atmosphere.

The team, led by postdoctoral researcher Chuan Xia and chemical and biomolecular engineer Hoatian Wang, has described formic acid as an energy carrier or “a fuel-cell that can generate electricity and emit carbon dioxide – which you can grab and recycle again”. He has explained it as “a storage material for hydrogen that can hold nearly 1,000 times the energy of the same volume of hydrogen gas, which is difficult to compress”. Recent tests of the new electrocatalyst have showed energy conversion efficiency rates of about 42 per cent.

According to the researchers, two advancements were key in the development of the new device: the development of a two-dimensional bismuth catalyst (which helps to stabilise and preserve the catalyst) and the use of a solid-state electrolyte which eliminates the need for salt in the reaction. These developments have allowed the team to produce the nano-materials necessary for the process in bulk, whereas current technology produces catalysts on much smaller scales. Eliminating the salt also saves time and money, as the process of removing the salt from the final product is costly and requires more energy. The lab has managed to generate the formic acid for 100 continuous hours with negligible degradation of the reactor’s components, according to the University. The researchers hope that the technology can be developed further and applied to different industries for the purposes of fuel production. 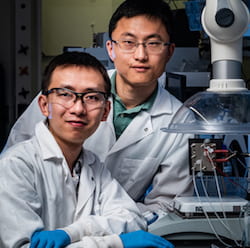